My sister brings me an antique obi from Kyoto.
Maybe this gift is her way of saying I should go back
to visit the country where we were born, to see gardens
of raked sand, Shinto shrines, and maples
with leaves shaped like a child’s handprint.
I unwrap the sash of persimmon-colored silk
embroidered with gold chrysanthemums,
plum branches, and brocade fans like the paper
fan she folds and unfolds when she dances
the Odori with her hair pulled back
in a knot at the nape of her neck.

The nape of the neck is an erogenous zone
in Japan. Women wear the kimono loosely draped,
exposing the swan’s slope of shoulder, the neck
whitened with rice powder. Once
a man kissed me there, saying, “It’s so
warm, so soft.” I never really loved him. I guess
I’d been away from home too long to feel pleasure
or pain at the stork’s bite, unlike the woman
who stepped from this pool of fallen silk
into the floating world of the past,
the gray sumi-e rain.

Still Life with One Apple

From earliest memory: one apple
in a bowl predating speech, spores

of sunlight floating on air like pollen
from the garden of Hesperides.

In childhood I wanted everything in pairs,
animals entering Noah’s ark two by two,

the symmetry of hand in hand,
heart to heart, bride and groom.

I thought the apple needed another apple
or at least the company of an orange or pear,

that the apple was lonely, that everything—
even an apple in a bowl—

had a soul. Was it wrong to believe
the apple could suffer and bleed,

to project my own feelings
onto that fruit?

To believe only a membrane
of matter and speed

separates blood from stone
and bone from apple seed.

To see the apple as a symbol
of the self, the universal soul,

as in Georgia O’Keefe’s Green
Apple on Black Plate,

a study in simplicity.
Still Life With An Empty Bowl—

I ate the apple to make it whole.

Rain falls on the Atomic Bomb Museum
where radiation-scarred angels
from Urakami Cathedral
weep behind glass
with statues of headless saints,
stained glass shards,
a melted rosary,
a charred rice bowl,
a child’s scorched robe,
a steel helmet with the remains of a skull,
a clock stopped by the blast. 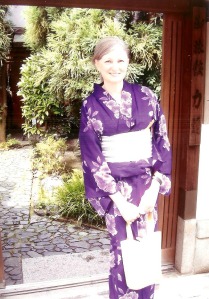 Rain falls on the shoreline
where a girl once drew circles in the sand,
trying to remember her mother’s face,
on the earth where the dying cried for water,
on a watchman’s shadow burned into a wall,
a twisted ladder leading to the sky,
on the Vault for the Unclaimed Remains of Victims,
a camellia tree that survived the flames,
on the black cenotaph at ground zero,
umbrellas blown inside-out
with wind.

Rain falls on camphor trees at the Sanno Shrine,
on stones inscribed with names of the dead,
a chain of a thousand origami cranes,
the statue of a mother and child,
the Fountain of Peace where water flows
in the wing-beats of a dove,
on the city where 70,000 people died.
While school children pose for photographs,
holding two fingers up in a V of peace,
North Korea fires seven long-range missiles
into the Japan Sea.
_______________

I wish I could wipe clouds from the sky
like tarnish from a platter,

as the shaman makes rain
by scattering ashes in the wind.

If I draw a smiling face on the weeping
windowpane, will the sun come out again?

I rub the bruised tray
until I can see the moon

of my face in its clear surface,
wiping shadows from teaspoons,

fork tines, and the scrolled handles
of knives, controlling whatever

Outside your window the sky looks like you rubbed the edge
of charcoal across it, smudged with sfumato clouds.
You sketch from a photograph taken
on Christmas morning when you were two
and your sister was five. A contour of smoke
curls around your cherub cheek.
You’ve captured your sister’s smile with a soft curve,
but the crown of her head floats off the page
as if its flat surface could never hold the memory
of that moment within such limited space.

Do you think it’s a mistake to spill over the edge
where the image bleeds into negative space?
When your mind goes as blank as untouched parchment,
when you follow your hand wherever it leads—to the empty space
beyond the margins of safety—when you risk falling
from the horizon line of the world
into the ellipse of the earth’s revolution,
when the skylark bones of your hand soar in an arc
of swift, penciled flight, when you trace the line
of rain falling straight from heaven to earth,
you will know how to draw from life.